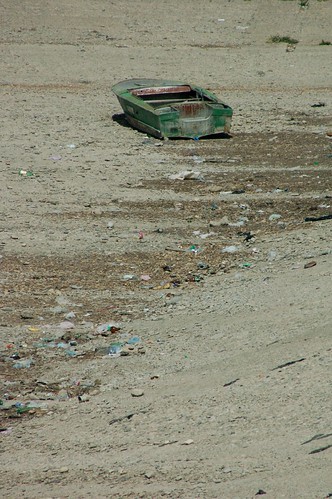 In recent decades, the rate at which humans worldwide are pumping dry the vast underground stores of water that billions depend on has more than doubled, say scientists who have conducted an unusual, global assessment of groundwater use.

These fast-shrinking subterranean reservoirs are essential to daily life and agriculture in many regions, while also sustaining streams, wetlands, and ecosystems and resisting land subsidence and salt water intrusion into fresh water supplies. Today, people are drawing so much water from below that they are adding enough of it to the oceans (mainly by evaporation, then precipitation) to account for about 25 percent of the annual sea level rise across the planet, the researchers find.

Soaring global groundwater depletion bodes a potential disaster for an increasingly globalized agricultural system, says Marc Bierkens of Utrecht University in Utrecht, the Netherlands, and leader of the new study.

“If you let the population grow by extending the irrigated areas using groundwater that is not being recharged, then you will run into a wall at a certain point in time, and you will have hunger and social unrest to go with it,” Bierkens warns. “That is something that you can see coming for miles.”

He and his colleagues will publish their new findings in an upcoming issue of Geophysical Research Letters, a journal of the American Geophysical Union.

In the new study, which compares estimates of groundwater added by rain and other sources to the amounts being removed for agriculture and other uses, the team taps a database of global groundwater information including maps of groundwater regions and water demand. The researchers also use models to estimate the rates at which groundwater is both added to aquifers and withdrawn. For instance, to determine groundwater recharging rates, they simulate a groundwater layer beneath two soil layers, exposed at the top to rainfall, evaporation, and other effects, and use 44 years worth of precipitation, temperature, and evaporation data (1958–2001) to drive the model.

Applying these techniques worldwide to regions ranging from arid areas to those with the wetness of grasslands, the team finds that the rate at which global groundwater stocks are shrinking has more than doubled between 1960 and 2000, increasing the amount lost from 126 to 283 cubic kilometers (30 to 68 cubic miles) of water per year. Because the total amount of groundwater in the world is unknown, it’s hard to say how fast the global supply would vanish at this rate. But, if water was siphoned as rapidly from the Great Lakes, they would go bone-dry in around 80 years.

Groundwater represents about 30 percent of the available fresh water on the planet, with surface water accounting for only one percent. The rest of the potable, agriculture friendly supply is locked up in glaciers or the polar ice caps. This means that any reduction in the availability of groundwater supplies could have profound effects for a growing human population.

The new assessment shows the highest rates of depletion in some of the world’s major agricultural centers, including northwest India, northeastern China, northeast Pakistan, California’s central valley, and the midwestern United States.

“The rate of depletion increased almost linearly from the 1960s to the early 1990s,” says Bierkens. “But then you see a sharp increase which is related to the increase of upcoming economies and population numbers; mainly in India and China.”

As groundwater is increasingly withdrawn, the remaining water “will eventually be at a level so low that a regular farmer with his technology cannot reach it anymore,” says Bierkens. He adds that some nations will be able to use expensive technologies to get fresh water for food production through alternative means like desalinization plants or artificial groundwater recharge, but many won’t.

Most water extracted from underground stocks ends up in the ocean, the researchers note. The team estimates the contribution of groundwater depletion to sea level rise to be 0.8 millimeters per year, which is about a quarter of the current total rate of sea level rise of 3.1 millimeters per year. That’s about as much sea-level rise as caused by the melting of glaciers and icecaps outside of Greenland and Antarctica, and it exceeds or falls into the high end of previous estimates of groundwater depletion’s contribution to sea level rise, the researchers add.