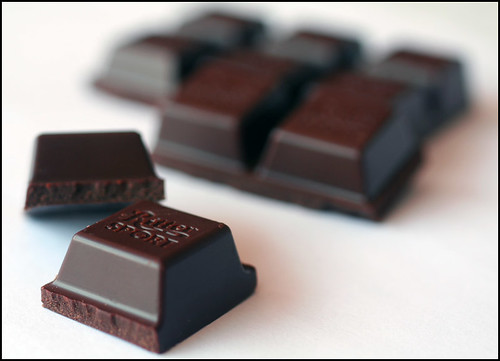 Researchers at Johns Hopkins have discovered that a compound in dark chocolate may protect the brain after a stroke by increasing cellular signals already known to shield nerve cells from damage.

Ninety minutes after feeding mice a single modest dose of epicatechin, a compound found naturally in dark chocolate, the scientists induced an ischemic stroke by essentially cutting off blood supply to the animals’ brains. They found that the animals that had preventively ingested the epicatechin suffered significantly less brain damage than the ones that had not been given the compound.

While most treatments against stroke in humans have to be given within a two- to three-hour time window to be effective, epicatechin appeared to limit further neuronal damage when given to mice 3.5 hours after a stroke. Given six hours after a stroke, however, the compound offered no protection to brain cells.

Sylvain Doré, Ph.D., associate professor of anesthesiology and critical care medicine and pharmacology and molecular sciences at the Johns Hopkins University School of Medicine, says his study suggests that epicatechin stimulates two previously well-established pathways known to shield nerve cells in the brain from damage. When the stroke hits, the brain is ready to protect itself because these pathways — Nrf2 and heme oxygenase 1 — are activated. In mice that selectively lacked activity in those pathways, the study found, epicatechin had no significant protective effect and their brain cells died after a stroke.

The study now appears online in the Journal of Cerebral Blood Flow and Metabolism.

Eventually, Doré says, he hopes his research into these pathways could lead to insights into limiting acute stroke damage and possibly protecting against chronic neurological degenerative conditions, such as Alzheimer’s disease and other age-related cognitive disorders.

The amount of dark chocolate people would need to consume to benefit from its protective effects remains unclear, since Doré has not studied it in clinical trials. People shouldn’t take this research as a free pass to go out and consume large amounts of chocolate, which is high in calories and fat. In fact, people should be reminded to eat a healthy diet with a variety of fruits and vegetables.

Scientists have been intrigued by the potential health benefits of epicatechin by studying the Kuna Indians, a remote population living on islands off the coast of Panama. The islands’ residents had a low incidence of cardiovascular disease. Scientists who studied them found nothing striking in the genes and realized that when they moved away from Kuna, they were no longer protected from heart problems. Researchers soon discovered the reason was likely environmental: The residents of Kuna regularly drank a very bitter cocoa drink, with a consistency like molasses, instead of coffee or soda. The drink was high in the compound epicatechin, which is a flavanol, a flavanoid-related compound.

But Doré says his research suggests the amount needed could end up being quite small because the suspected beneficial mechanism is indirect. “Epicatechin itself may not be shielding brain cells from free radical damage directly, but instead, epicatechin, and its metabolites, may be prompting the cells to defend themselves,” he suggests.

The epicatechin is needed to jump-start the protective pathway that is already present within the cells. “Even a small amount may be sufficient,” Doré says.

Not all dark chocolates are created equally, he cautions. Some have more bioactive epicatechin than others.

“The epicatechin found in dark chocolate is extremely sensitive to changes in heat and light” he says. “In the process of making chocolate, you have to make sure you don’t destroy it. Only few chocolates have the active ingredient. The fact that it says ‘dark chocolate’ is not sufficient.”