“I am going to start doing video podcasts and am in the process of picking out what gear [I want to use]. I don’t want to use my MacBook Pro iSight as the quality just isn’t there. As I am not up to speed with the current equipment available these days, I was wondering if you have any suggestions? My budget is around $400.”

Well John, you’re definitely entering the world of online video at the right time. The trick to finding a good video setup is determining exactly what you want from your vlog. Do you want it to be a pro-level rig with green screen and 1080p video? Would you want something a bit more along the lines of you sitting in front of a camera, giving your thoughts on various topics? If you’re looking for a good setup without a lot of investment, here are some ideas that might help you out:

So, what kind of setup can you put together on a tight budget? Here are a few suggestions:

Secure digital (SD) non-volatile memory cards are used in devices all over the world for storing data such as photographs, videos, and documents for transfer to other devices later on. According to the SD Card Association, “As the de-facto industry standard, SD technology is used by more than 400 brands across dozens of product categories and in more than 8,000 models.”

If you own a recently-made digital camera or pocket camcorder, there is a good chance it uses SD technology. There are two main types of SD cards out on the market to date. Standard (SD) and high-capacity (SDHC) are currently the frontrunners of the standard with mini and micro variations used more frequently in smartphones and other smaller devices.

Compatibility
If you have a device that is SDHC capable, it will accept both SDHC and SD cards. SDXC capable devices accept SDHC and standard SD cards as well. Some devices that support the older format have received firmware updates to accept SDHC cards as well. The SDHC standard was introduced in 2006 and was quickly adopted by hardware manufacturers for its higher transfer speeds and larger capacity, and for this reason most if not all SD-friendly devices made today accept the higher-capacity cards. Existing SDHC hosts will only support SDXC cards at up to UHS104 speeds.

Prior to SDHC’s release, some card manufacturers forced standard SD cards to a 4 GB capacity by changing the memory block sizes outside of the standard. This created a card that was rarely accepted by most devices and was quickly replaced when SD 2.0 standards were released.

SDXC cards are currently emerging and gaining ground as new devices come out. Because they use an exFAT file system, devices and computers need to have built-in support for the format. At the present time, operating systems supporting exFAT include:

Capacity
Currently, the maximum supported capacity on a standard SD card is 2 GB. This is due in part to memory block size limitations and industry-set standards.

SDHC cards can theoretically reach 2 TB in capacity, though industry standards currently set an artificial limit of 32 GB. It is believed that the standard will be revised at some point in the future to include larger capacity. One of the reasons SDHC cards have such a higher capacity is the decision to use sector-based memory addressing rather than bytes.

In 2009, SDXC was introduced that works with a newer standard allowing a maximum capacity of 2 TB. As of March 2011, the largest capacity SDXC card on the market weighs in at 128 GB.

Transfer Speed
Thanks to the SD standards, cards are given ratings in order to express their general transfer speeds. With standard SD cards, these ratings represent a maximum speed. SDHC and SDXC cards are rated by their average sustained transfer rate. Here are the current card ratings via Wikipedia:

You can find these class numbers located on the front of the cards surrounded by a broken circle resembling a thin C. Class 0 cards are rarely sold currently. A class 2 card is great for standard-definition video and non-raw photography. Class 4 and 6 cards are capable of full HD video recording in addition to RAW format photography. Class 10 is geared for full HD and HD still consecutive recording.

More recently, a new speed class called UHS has emerged which boasts transfer speeds high enough to record real-time broadcasts and capture large-size HD videos. This classification is available on some SDHC and SDXC cards and is indicated by a U surrounding a 1 where a numbered classification would appear.

Having the ability to film at night is important to many amateur and professional video makers. So, which camcorders offer night vision? This is both a simple and complex question to answer depending on what exactly you consider night vision to be.

The most common form of “night vision” included on camcorders in the consumer and prosumer market uses a special light that fills the area in front of the lens with infrared that is invisible to the naked eye but can be picked up through the camera’s infrared censor. This method is called active illumination.

While this isn’t “true” night vision, it is a much less expensive alternative that is used even in professional settings. Shows such as Ghost Hunters, which follows a crew through a darkened house searching for paranormal activity, are filmed using an infrared light to achieve a clear image without actually creating any visual light in the room.

When searching for cameras with infrared technology, the most common term listed in the product’s description is simply “IR”. Most professional-grade camcorders include this technology as well.

What is typically considered “true” night vision is what’s called, “image intensification.” It works by collecting small bits of light and a lower portion of the infrared spectrum and amplifying them to create an image. Some high-end camcorders offer this form of low-light vision. This can also be achieved with special night vision attachments that are built to work with standard camcorders. One example of this is the NVFlex by Lomo.

Another method of achieving night vision is thermal imaging which unlike either of the previously mentioned methods, it detects heat signatures and displays them as colorful outlines with color varying depending on how much heat the subject radiates. One camera that utilizes this technology is the Flir T200 which retails at about $8,450. 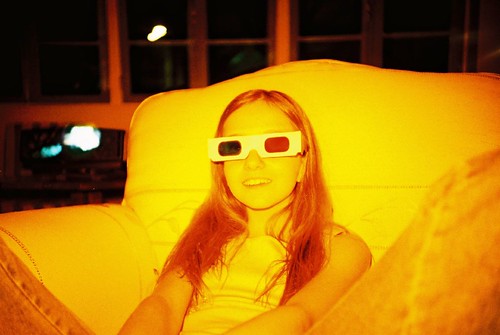 Being in the market for a new camcorder myself, I have to admit that trying to understand why anyone in their right mind would spend money on a 3D camcorder is difficult to get my head around.

Here are the facts: the new Panasonic HDC-SDT750 HD sounds like a dream come true from the perspective of a quality device with the kinds of functions one would want from such a device. And of course, going with HD as an option is a given these days. But 3D, seriously?

Worse is what sounds like a possible performance hit when using the 3D lens. Some hit on how well things float along is fine, but it again leads me to wondering why anyone would want to go 3D with a pro-sumer camcorder? Am I just too old fashioned in my thinking?

Around the world, the name Canon means optical excellence, advanced image processing and superb performance. And Canon digital video camcorders are no exception.

Whether you’re shopping for your first camcorder, or would like to upgrade from analog to digital, the new ZR camcorders are a perfect balance of style, performance, and affordability. The ZR digital camcorders give you a brilliant Genuine Canon 35x Optical Zoom lens, Canon’s advanced image stabilization system, widescreen HR recording , DIGIC DV image processing, joystick controller, and level and grid markers. The results are brilliant video and digital photos that you can easily share with family and friends.

The ZR800 has everything you need to enter the world of digital video camcorders including some features that are traditionally found on more expensive models. It provides the user with the perfect combination of style and ease-of-operation that makes it easy to capture life’s precious memories.

Valentine’s Day, the holiday when family, loved ones, and friends shower each other with gifts of affection, love and admiration. Candy, cards and jewelry may not be enough to satisfy the technology enthusiast in your life. Samsung’s innovative electronics products offer tech aficionados the most unique ways to show that special someone you care. Some of the most distinctive and hottest gifts for your “techie” at heart include:
END_OF_DOCUMENT_TOKEN_TO_BE_REPLACED

I recently spent some time testing one of Sony’s Handycam DVD models to see what the recording and editing experience is like from a user perspective. Recording isn’t much different than recording with a MiniDV camcorder. The editing experience leaves much to be desired. The Handycam units store video in a VOB file format, ready for immediate playback on most consumer DVD players but absolutely worthless within the context of most commercial video editing packages. To make editing even more problematic, the USB interface for the Sony Handycam is only recognized by the bundled software – you can’t access the camcorder from Windows Explorer as you can with a MiniDV camcorder.

As I discovered with the help of some readers, Sony includes support for editing the video files created on the DVDs using their on Sony Vegas editing suite. In most cases, this software is not included with the DVD camcorders and no indication is given that this is the best alternative. I was also able to trick Adobe Premiere Elements and Nero Vision Express into recognizing the video file simply by changing the file extension of the video. All this is a rather imperfect solution for anyone who doesn’t want to get serious about understanding how video editing works or doesn’t have the budget to invest in video editing software. Possibly the best solution for editing video created with a Sony Handycam DVD came from a reader who recommends VirtualDubMod as an editing solution for VOB files.

The bottom line here is, if you purchased a DVD camcorder, there are some workarounds for editing video, but if editing is important to you, you’re better off buying a MiniDV camera or one of those camcorders with an SD card.

Exsate DV Capture Live enables you to capture and convert DV video from your camcorder via an IEEE-1394 FireWire connection. While the program is capturing the video, it automatically converts it to AVI or WMV format in real-time and saves it to your hard drive. You can optionally imprint the DV time stamp into the captured video and choose to have it appear once a day, once an hour, or with every scene.
END_OF_DOCUMENT_TOKEN_TO_BE_REPLACED