Many years ago I read an article about corporate America and why most companies only rein on top for about 20 years. I am not sure why, but I recorded that useless bit of information back in my memory banks.  I always wondered if this information was true or not. So when I read an article from U.S. News about ten companies who have lost their edge, I was not surprised since most of the companies listed fit into the 20 year or less range.

Here are the companies listed as having lost their edge:

Blockbuster. Blockbuster’s conventional retail outlets seem hopelessly outdated. The firm is closing hundreds of stores, working off debt, and copying some of its competitors’ moves, with a fighting chance to catch up. But it’s now chasing its industry instead of leading it.

Eastman Kodak. Since the late 1980s, Kodak has tried to expand into pharmaceuticals, memory chips, health care imaging, document management, and many other fields, but the magic has never returned. Its stock price is now about 96 percent below the peak it hit in 1997.

Microsoft. It helped give the PC mass-market appeal, and still dominates much of the software industry. But Microsoft has also fumbled or passed up many great ideas that others capitalized on, like Web TV, E-books, smartphones, and the tablet PC. And sure enough, the market is shifting away from the PCs that Microsoft’s software is designed for.

Sears. Sears has dabbled in insurance, financial services, real estate, Internet service, and many other business lines as it has tried to find its way. Yet it’s still looking for a winning strategy, and is now paired with Kmart in a kind of faded-glory holding company. Analysts think a Web strategy might ultimately save the firm as stores continue to vanish.

Sony. What tripped up Sony and some of its competitors was the move from hardware to software, which put the emphasis on the brains of the device rather than the circuitry. As a result, faster-moving competitors like LG, Samsung, Vizio, Apple, and the various makers of cell phones—which of course come with cameras these days—have outpaced this old-school innovator.

Sun Microsystems. As PCs became more powerful, fewer big customers needed Sun’s costly servers, and Sun spent most of the last decade downsizing and retrenching. With Sun’s market value just a fraction of what it had once been, Oracle bought the company earlier this year.

Toys “R” Us.   Toys “R” Us has been in turnaround mode since 2004, when private investors bought the company. The rehab has involved store closings, layoffs, and downsizing, with the owners hoping a public offering this year or next will help raise cash to pay down debt taken on back when the firm was rapidly expanding.

Yahoo. Yahoo’s snub of a $45 billion buyout offer from Microsoft in 2008 now looks like a huge gaffe, since Yahoo’s market value has fallen to a scant $19 billion or so. CEO Carol Bartz arrived in 2009 with a mandate to clarify the company’s focus and amp up profitability. One of her first moves: a partnership with old suitor Microsoft meant to increase revenue for both firms without the tension of a buyout.

In my opinion this list is right on. These companies are no longer the leaders and are now following the pack. Especially of interest is Microsoft. Though they are currently doing well, it will be interesting to see what happens when Google comes out with their Chrome OS and how well the new OS is accepted by the public. The Redmond giant could find itself in trouble if Chrome takes off.

What do you think? Do you agree with the list above?

I’m not a Michael Arrington fan — not in the least. I find just about everything he touches to be a total waste of my time. But every once in a while, he makes headlines that are difficult to ignore. This is one of those times.

In an interview with Michael Arrington, Yahoo! CEO Carol Bartz reaffirms something for me — she’s only an effective CEO on paper. Bartz has been one of the biggest mistakes I have seen Yahoo! make since its inception. While I am sure she did great things elsewhere, while running Yahoo! she has not made any clear positive changes on behalf of the company that I can see. Then, to top it all off, she swears like a sailor to someone interviewing her and asking her a legitimate question.

I find her to be a mistake for Yahoo! and the sooner the company can thrust her into the distant past, I imagine the better. Thanks to appearances like these, she comes off like an unfortunate individual who is in dire need of a career change.

Her track record of failure was actually well documented during the course of the interview; I can only hope that she either “gets focused,” to borrow her words… or steps down. I can’t speak about her as a person, but based on what I have seen since her appointment to Yahoo!, I am not impressed.

In what can only be described as flawed logic, the CEO of Yahoo, Carol Bartz, stated in a recent interview with the BBC that:

“Google is going to have a problem because Google is only known for their search…they’ve got to find other things to do.” 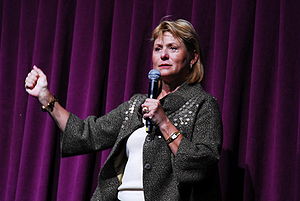 Now you have to laugh at a statement like that. If anything Google is doing more than Yahoo could ever hope to accomplish.

But what is also surprising is that the Yahoo chief gets paid $47 million dollars. For that amount of money one would think that she would know what the competition is doing compared to her own company.

Biting my tongue here as I would like to say what I really think of Carol Bartz and how she is continuing to screw Yahoo! in the long term, but that is beside the point. No, instead I will let the angry investors do this for me.

While the big boss is selling stock, brokering deals with the competition, and basically acting like a cheerleader without any real clear purpose to her cheers, Yahoo! continues to burn.

Thus far, her biggest achievement has been demonstrating her ability to cash out stock and give in to the competition. Perhaps next she’ll send over the best software engineers to work for Google? Don’t knock it; given her actions thus far it almost sounds plausible.