The Dying Swan is sometimes moving smoothly and gently, sometimes in a dramatic and fiery manner, as Tchaikovsky’s majestic music from the ballet Swan Lake is playing. Yet this is no ordinary ballet dancer, but a robot in the form of a swan, created at Mälardalen University and choreographed by professional dancer Åsa Unander-Scharin.

The swan robot’s just over four-minute-long dance has so far been seen only by a select few. But it has already made a big impression. Tearful eyes and words like “touching,” “fascinating,” and “beautiful” are some of the reactions.

“We want to explore the limits of what a robot can do, what human expressions it can mimic, and how it affects people’s perception of the robot when it makes an appearance in art and dance,” says Lars Asplund, Professor of Computer Science at Mälardalen University in Västerås, Sweden.

His research field is robotics and he has designed the approximately one-metre-tall dancing swan on the basis of a robot that was previously a student’s degree project. The robot was built by a modular system and in the white wings, neck, beak and feet there are a total of 19 different joints, which makes it very flexible.

The idea for the dancing robot was hatched jointly by Lars Asplund and his colleague Kerstin Gauffin, who works with theatre at Mälardalen University.

“With our swan we are showing that we can use robots in new ways — simply because they are beautiful and give the audience new experiences,” says Kerstin Gauffin, who wants to see robots appear on stages along with “ordinary” actors.

She got in touch with the professional dancer and choreographer Åsa Unander-Scharin, who now has designed the robot’s special dance to the tunes of the famous composer Tchaikovsky. By systematically having the robot swan perform each movement by itself — right wing up, neck down, etc. — Unander-Scharin has “taught” the robot swan her choreography because the computer inside it “recalls” the movement pattern and then plays it as an entire dance program.

Åsa Unander-Scharin is used to working with stage performances in which the choreography interacts with music, scene space and new technology. She has also done research in the field and wrote the thesis Human mechanics and soulful machines: choreographic perspectives on human qualities in body movement.

“I think it’s exciting to see how emotionally touched people can get by machines, and to do the choreography for the swan robot has been great fun,” says Åsa Unander-Scharin.

On September 23-26, Mälardalen University’s dancing robot will be shown for the first time in public, at Sweden’s largest book fair in Gothenburg. It is hoped, obviously, that the swan robot will be a great success with the public. 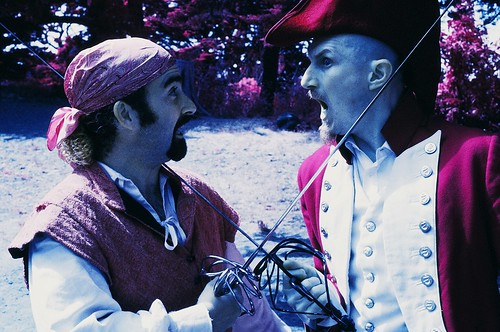 A new study analysing interactions between players in a virtual universe game has for the first time provided large-scale evidence to prove an 80 year old psychological theory called Structural Balance Theory. The research, published today in PNAS, shows that individuals tend to avoid stress-causing relationships when they develop a society, resulting in more stable social networks.

Today’s study, carried out at Imperial College London, the Medical University of Vienna and the Santa Fe Institute, analyses relationships between 300,000 players in an online game called Pardus. In this open-ended game, players act as spacecraft exploring a virtual universe, where they can make friends and enemies, and communicate, trade and fight with one another.

Scientists currently study data from people’s electronic interactions, such as emails, mobile phones and online retail behaviour, to improve our understanding of human societies. Online games such as Pardus produce vast amounts of data that scientists can also use to study interactions between players, applying their findings to understanding the way that people interact in society.

Structural Balance Theory is an 80 year old psychological theory that suggests some networks of relationships are more stable than others in a society. Specifically, the theory deals with positive and negative links between three individuals, where ‘the friend of my enemy is my enemy’ is more stable (and therefore more common) than ‘the friend of my friend is my enemy’.

In today’s study, information about interactions between players in the game is more detailed than that from other electronic sources, because it includes data on the types of relationship and whether the interactions are positive or negative. This has enabled the authors of the study to show that positive relationships form stable networks in society, proving Structural Balance Theory for the first time.

Dr Renaud Lambiotte, one of the authors of the study from the Institute for Mathematical Sciences at Imperial College London, said: “I find it fascinating to understand how we all interact with one another to form complex social networks. I think it is astounding that I’m this tiny point in such an enormous network of people. Our new study reveals in more detail than ever before the key ingredients that make these networks stable.”

In today’s study, mathematicians looked at six types of interaction between players in an online game: friendship, communication, trade, hostility, aggression and punishment. Each one defines a network on its own; all six together combine to form one large network. A unique aspect of the data is that some of the links have a positive connotation (friendship, communication and trade), while others correspond to negative interactions (hostility, aggression and punishment).

The researchers analysed data from the game on two levels: first by analysing individual networks; and then by looking at the interplay between all the networks.

The research also revealed strong interactions between different types of links, with some networks overlapping extensively, as players are likely to engage in similar interactions, and others tending to exclude each other. For example, friendship and communication networks overlap: as we would expect, friends tend to talk to each other. However, trade and hostility did not overlap at all, showing that enemies tend not to trade with one another.

Dr Renaud Lambiotte said: “This may seem like an obvious finding, as we would all prefer to communicate more with people we like. However, nobody has shown the evidence for this theory on such a large scale before.”

The researchers are currently developing their mathematical tools for large, complex networks in order to study patterns of communication between millions of people from mobile phone data and also to examine biological problems such as the way different regions of the brain communicate with each other.

Dealing with other human beings is always a challenge, but knowing what to do, or not do, is very helpful. We have all experienced some type of a problem that we need to call a company in order to get the problem resolved. The most annoying aspect of the call is getting through the maze of phone buttons trying to reach a real human being. Once we get to a real person, how you proceed next will determine just how well your problem is resolved.

But in one recent survey I read in which people were asked their opinions about dealing with customer service, this one stood out:

“What would you do if you were in my situation?”

What is your favorite technique?

You can read all of the suggestions at the link below.

This is a very interesting article and what may happen in 15 to 30 years. And though it may see far out, just look how fast technology has improved just in the past 10 years. I think you may find this article very enlightening and entertaining as well. I sure did.

“The inventor, author, and futurist predicts that in 15 to 30 years, nanobots will roam our blood streams fixing diseased or aging organs, computers will back up our human memories, and conference calls will be replaced by meetings in virtual resorts.

In just 15 years, we’ll begin to see the merger of human and computer intelligence that ultimately will enable people to live forever. At least that’s the prediction of author and futurist Ray Kurzweil.

Kurzweil told a keynote audience at last week’s SCO6 supercomputing conference that nanobots will roam our blood streams fixing diseased or aging organs, while computers will back up our human memories and rejuvenate our bodies by keeping us young in appearance and health.

The author of the book The Singularity Is Near, Kurzweil says within a quarter of a century, non-biological intelligence will match the range and subtlety of human intelligence. He predicts that it will then soar past human ability because of the continuing acceleration of information-based technologies, as well as the ability of machines to instantly share their knowledge.”