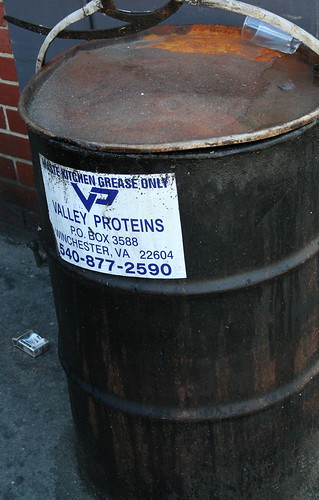 Don’t pour that dirty fat from the frier down the sink — it could be used to make the fuel of the future.

Hydrogen has been tipped as a cleaner, greener alternative to fossil fuels. But scientists have struggled to find a way to make it that doesn’t consume vast amounts of energy, use up scarce natural resources, or spew out high levels of greenhouse gas.

Researchers at the University of Leeds have now found an energy-efficient way to make hydrogen out of used vegetable oils discarded by restaurants, takeaways, and pubs. Not only does the process generate some of the energy needed to make the hydrogen gas itself, it is also essentially carbon-neutral.

“We are working towards a vision of the hydrogen economy,” said Dr. Valerie Dupont, who is leading the Leeds-based project. “Hydrogen-based fuel could potentially be used to run our cars or even drive larger scale power plants, generating the electricity we need to light our buildings, run our kettles and fridges, and power our computers. But hydrogen does not occur naturally, it has to be made. With this process, we can do that in a sustainable way by recycling waste materials, such as used cooking oil.”

Hydrogen can already be made quite easily from simple fossil fuels, such as natural gas. The fuel is mixed with steam in the presence of a metal catalyst then heated to above 800 degrees centigrade to form hydrogen and carbon dioxide.

However when much more complex fuels are used, such as waste vegetable oil, it is difficult to make very much hydrogen using this method without raising the temperature even further. The reactions could be run at lower temperatures but the catalysts would quickly become poisoned by residues left over from the dirty oil. In short, the process is not only expensive but also environmentally unsound.

Dr. Dupont and colleagues have perfected a two-stage process that is essentially self-heating. To begin, the nickel catalyst is blasted with air to form nickel oxide — an ‘exothermic’ process that can raise the starting temperature of 650 degrees by another 200 degrees. The fuel and steam mixture then reacts with the hot nickel oxide to make hydrogen and carbon dioxide.

The researchers also added a special ‘sorbent’ material to trap all the carbon dioxide produced, leaving them with pure hydrogen gas. This trick eliminated the greenhouse gas emissions and also forced the reaction to keep running, increasing the amount of hydrogen made.

“The hydrogen starts to be made almost straight away, you don’t have to wait for all of the catalyst to be turned into pure nickel,” Dr. Dupont said. “So as well as the generation of heat, this is another way that makes the process very efficient.”

The researchers have shown that the two-stage process works well in a small, test reactor. They now want to scale-up the trials and make larger volumes of hydrogen gas over longer periods of time.

“The beauty of this technology is that it can be operated at any scale. It is just as suitable for use at a filling station as at a small power plant,” Dr. Dupont said. “If we could create more of our electricity locally using hydrogen-powered fuel cells, then we could cut the amount of energy lost during transmission down power lines.”

Details of the work will be published in the journal Bioresource Technology.

[Photo above by rachaelvoorhees / CC BY-ND 2.0] 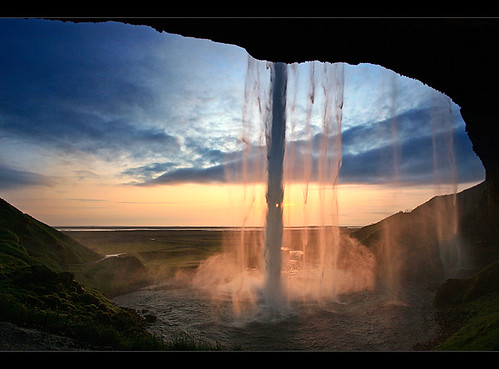 Materials scientists at the University of Wisconsin-Madison have designed a way to harvest small amounts of waste energy and harness them to turn water into usable hydrogen fuel.

The process is simple, efficient and recycles otherwise-wasted energy into a useable form.

“This study provides a simple and cost-effective technology for direct water splitting that may generate hydrogen fuels by scavenging energy wastes such as noise or stray vibrations from the environment,” the authors write in a new paper, published in the Journal of Physical Chemistry Letters. “This new discovery may have potential implications in solving the challenging energy and environmental issues that we are facing today and in the future.”

The researchers, led by UW-Madison geologist and crystal specialist Huifang Xu, grew nanocrystals of two common crystals, zinc oxide and barium titanate, and placed them in water. When pulsed with ultrasonic vibrations, the nanofibers flexed and catalyzed a chemical reaction to split the water molecules into hydrogen and oxygen.

When the fibers bend, asymmetries in their crystal structures generate positive and negative charges and create an electrical potential. This phenomenon, called the piezoelectric effect, has been well known in certain crystals for more than a century and is the driving force behind quartz clocks and other applications.

Xu and his colleagues applied the same idea to the nanocrystal fibers. “The bulk materials are brittle, but at the nanoscale they are flexible,” he says, like the difference between fiberglass and a pane of glass.

In addition, Xu says, “because we can tune the fiber and plate sizes, we can use even small amounts of [mechanical] noise — like a vibration or water flowing — to bend the fibers and plates. With this kind of technology, we can scavenge energy waste and convert it into useful chemical energy.”

Rather than harvest this electrical energy directly, the scientists took a novel approach and used the energy to break the chemical bonds in water and produce oxygen and hydrogen gas.

“This is a new phenomenon, converting mechanical energy directly to chemical energy,” Xu says, calling it a piezoelectrochemical (PZEC) effect.

The chemical energy of hydrogen fuel is more stable than the electric charge, he explains. It is relatively easy to store and will not lose potency over time.

With the right technology, Xu envisions this method being useful for generating small amounts of power from a multitude of small sources — for example, walking could charge a cell phone or music player and breezes could power streetlights.

“We have limited areas to collect large energy differences, like a waterfall or a big dam,” he says. “But we have lots of places with small energies. If we can harvest that energy, it would be tremendous.”

The tickets for Gnomedex are almost sold out! Get yours before it’s too late.

The social networking scene in Hawaii is phenomenal.

Do debit cards put you at more risk of having your identity stolen?

If you’re looking for the best way to maintain your home or office network, look no further than SolarWinds.

Could you live in Hawaii?

Are we on a path to metallic hydrogen?

Is Apple controlling the App Store a little too much?

Are you going to Gnomedex?

GoToAssist can help you provide instant support to clients, friends, or family members.

Flickr keeps getting better, but is it a waste of time?

The Xbox Live summer update puts a world of entertainment at your fingertips.

Capturing images on your screen is pretty simple, right? But what if you want to do more with them? Then you want to snag a copy of SnagIt. How did you ever get along without screen capture software? This one even integrates with AOL instant messenger and potentially your blog, too! Start your next screen capture the right way — manage it with TechSmith’s SnagIt.

If you want to lull a drunk into thinking you are his friend, give him more booze. So as we in the world continue to drink more oil at an alarming rate, the oil pimps in the middle east are giving us more to drink.

As with any drunk, the only one who can help them is the drunk themselves. For over 30 years we in America have sat on our hands doing little to wean our appetites for the black gold of the earth. Just when we see that our auto companies are starting to take the oil crisis serious and start to produce alternative fueled and hybrid vehicles, the bartenders in the middle east decide to buy the house a round of drinks.

White House Deputy Press Secretary Tony Fratto praised the step. “Any increase in production in today’s oil market is welcome,” Fratto. “It is important that we also take steps to increase domestic production and our refining capacity.”

Al-Naimi also said the Saudi government will invest in oil projects that would allow Saudi Arabia to have the capacity to produce 12.5 million barrels per day by the end of next year.

King Abdullah’s announcement came at the end of the Jeddah energy summit, where he also called for OPEC to set aside $1 billion for a strategy to ease the oil price crisis. He said $500 million should be given to developing nations to help them get the energy they need.

“It is important that we also take steps to increase domestic production and our refining capacity.”

How about this one:

Saudi Arabia to have the capacity to produce 12.5 million barrels per day by the end of next year.

Of course. The last thing they want to see is for us to switch to another fuel. Their hope is that we will abandon our research into electric, hydrogen, hybrids or any alternatives to gasoline. [See LS9 below.]

Are we going to be lulled into another stupor? If gas prices fall a few pennies will we consider this a deal and abandon our efforts to curb our drinking?

I know most of us are in ‘shock and awe’ at the high price of gasoline we have been experiencing these past few months or so. Plus I know none of us realized that foreign oil had us in a strangle hold, because obviously we would of done something about it. As we have sat on our hands for some 30 years, oblivious to what was happening and content on purchasing huge SUV’s with big V-8’s, I believe it is time for America to wake up and finally take a look at who is to blame for the oil crisis. All one has to do is to look in the mirror.

We have allowed ourselves to be lulled by our politicians into believing that Washington is working on a solution. When in reality big oil and the American car companies have control on the type of cars we will drive and what fuels they will use. No one can disagree with the fact that the gasoline engine is the most inefficient means of moving a vehicle and that some alternative is needed. The current administration took a path of ethanol from corn and the increased use of diesel as the way to solve the problem. A blind man can see using a food source is akin to throwing a drowning man an anchor. I also don’t believe that anyone would think that diesel, though producing better mileage, is environmentally friendly.

So we now have two other concepts that are being considered by the automobile industries. GM is leading the way in their quest for an all electric car. Known as the Volt, GM projects this futuristic vehicle will be coming to town sometime in 2010. There is only one, maybe two, minor issues. GM admits that battery technology needs to be improved. The second is, what do you do with all of those batteries once they are used?

Over at Toyota and Honda, they are looking into hydrogen technology. Using something called a fuel cell, the concept promises a non-polluting vehicle that produces only water. But the Honda vehicles use natural gas to produce hydrogen which is stored in the cell, and the vehicle uses an electric motor, which uses batteries also to store the juice.

So my question is this. Are either electric or hydrogen vehicles the way to solve our current predicament?  What do you think?