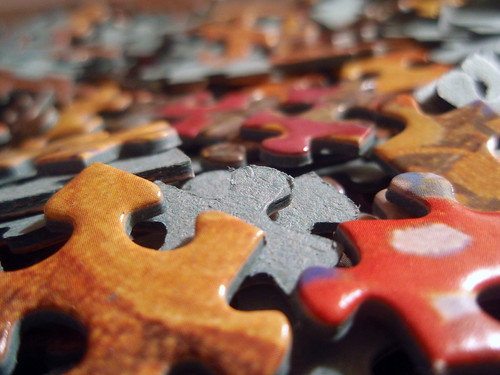 This blog is primarily about decision theory and how to apply it. But rather than get bogged down in continuous theoretical musings and equations, I try to emphasize the underlying thought processes by adding puzzles which constitute a type of decision making. Since all this ties back to the real world, statistics will often be involved. The difference in decision strategies depending on whether you have a one-time decision or can rely on the statistics of many choices was illustrated in my blog entry More Pain Than Gain.

Developing a taste for puzzles probably happens in adolescence or earlier. I was greatly influenced by Martin Gardener‘s column in Scientific American (see my post on the mechanics of voting). One puzzle from him (this is from memory, so the quote is not exact) goes: You are in a room with some stuff, but no instruments. On a table you find two iron rods. One of them is magnetized. The other is not. How can you determine which is which? The room contains no other ferrous material, batteries, wires, other magnets, etc.

Surprisingly, there are several ways to solve this puzzle.

The charm of this little gem is the “Aha” moment when you see how to do it.

Yes, I gave you enough information.

Most of my puzzles can be solved with elemental math, but you can use calculus or advance solid geometry to work this one.

Hint: I gave you enough information.

Did you have the “aha” experience?

I will post the answers in a few days.

I spotted this graph over at graph jam [linked below] and though it is meant to be a joke, in reality I believe it is true. I would seriously doubt that there is anyone on the planet who actually reads every term of services for every product they buy. I know that I usually just glance over the terms and move on. If we actually read the terms we would never buy anything. LOL

What about you? Do you read any of the terms of service?

Dealing with other human beings is always a challenge, but knowing what to do, or not do, is very helpful. We have all experienced some type of a problem that we need to call a company in order to get the problem resolved. The most annoying aspect of the call is getting through the maze of phone buttons trying to reach a real human being. Once we get to a real person, how you proceed next will determine just how well your problem is resolved.

But in one recent survey I read in which people were asked their opinions about dealing with customer service, this one stood out:

“What would you do if you were in my situation?”

What is your favorite technique?

You can read all of the suggestions at the link below.

What keyboard are you using? [Or, which one was your favorite of all time?]

Matt Hartley has some hard lessons and close calls when PC shopping online. [Also, when buying bridges on eBay.]

Microsoft replies to the use of Chrome Frame. [Summary: “Don’t! IE’s just fine as is.” Hmmm…]

For excellent savings and all of your downloading needs, be sure to check out our downloads page! It is updated frequently, and there are great finds!

Ron Schenone replies to the use of Chrome Frame. [Summary: “Do it! It’s great stuff!” Hmmm…]

Byron Hinson’s take on Batman: Arkham Asylum seems favorable. [93% is, like, what? An A-?]

Audacious = bodacious! [“For Linux and OS X. Sorry, Windows users.” How often do you hear that?]

If you’re looking for the best way to maintain your home or office network, look no further than SolarWinds.

Will a price drop on the Nintendo Wii entice you to buy one? [If you just bought one, you’re probably Wii-ping. Sorry.]

Celebrity Deathmatch: Comcast vs. FCC. [“To the pain!”]

GoToAssist can help you provide instant support to clients, friends, or family members.

Baidu, not Google, seems to be the search king in the most populated nation on the planet. [Not surprising?]

Research finds that chatspeak has no impact on children’s spelling ability. [Maybe it’s just the water, then.]

New device could more effectively alleviate menstrual cramp pain. [Do I know better than to comment?]

Capturing images on your screen is pretty simple, right? But what if you want to do more with them? Then you want to snag a copy of SnagIt. How did you ever get along without screen capture software? This one even integrates with AOL instant messenger and potentially your blog, too! Start your next screen capture the right way — manage it with TechSmith’s SnagIt.

Having trouble understanding algebra? Do algebraic concepts, equations, and logic just make your head spin? We have great news: Head First Algebra: Rough Cuts Version is designed for you. Full of engaging stories and practical, real-world explanations, this book will help you learn everything from natural numbers and exponents to solving systems of equations and graphing polynomials.

This book is still in progress, but you begin to tackle algebra right away with our Rough Cuts edition, which lets you read the manuscript as it evolves, either online or via PDF.

Along the way, you’ll go beyond solving hundreds of repetitive problems, and actually use what you learn to make real-life decisions. Does it make sense to buy two years of insurance on a car that depreciates as soon as you drive it off the lot? Can you really afford an XBox 360 and a new iPhone? Learn how to put algebra to work for you, and nail your class exams along the way.

Last week I presented a puzzle in which the solution required looking at what people don’t know to find the answer. In short, the puzzle requires finding two integers, both of which are in the range 1-9. Two contestants, “The Multiplication Person” and “The Addition Person” or “M” and “A” try to find two hidden integers. The moderator has selected two integers from 1 to 9 (not zero). The only clues are that “M” has been shown the product of the two integers and “A” has been shown their sum. “A” and “M” can only communicate by saying whether they have the answer or not. No other signals are permitted.

“M” says, “I know the integers.” He writes the correct values on a blackboard and wins the applause of the crowd. What is the solution and how did “M” find it?

By a similar process, “M” considers that the sum “A” has seen can only be one of 17 numbers (1+1 through 9+9 or 2-18). However if the sum was 2, then the integers must be 1, 1; so that is impossible because “A” responded that he did not know the answer. Sums of 3 and 18 can be eliminated in the same way. Other possibilities can be eliminated just by “A” not knowing the answer, but when “M” realizes that by saying he didn’t know the answer, “A” can use this new information to solve the problem if the sum had some certain values. What are they? Since “A” didn’t know the answer even given the additional information that reduced the possibilities, “M” can eliminate some of sums, but he still doesn’t know the answer, and he says so in his second statement. “A” assumes that “M” has done the math correctly therefore the answers that would have been forced by his first statement of not knowing are incorrect. They proceed this way each giving the other additional information by acknowledging they were unable to compute the answer until only the correct answer of (2, 8) was possible. That is, the product was 16 and the sum 10.

There might be a quicker way to derive this, but I think the brute force method of sequentially eliminating contenders is the most straightforward.

Part of the charm of this puzzle for me is that the solution depends on the assumption of competence by each player of the other. That assumption is enough to pass information leading to a solution when it looks hopeless.

Suppose “A” had gone first. What would the result be then?

In response to the interest my original tutorial generated, I have completely rewritten and expanded it. Check out the tutorial availability through Lockergnome. The new version is over 100 pages long with chapters that alternate between discussion of the theoretical aspects and puzzles just for the fun of it. Puzzle lovers will be glad to know that I included an answers section that includes discussions as to why the answer is correct and how it was obtained. Most of the material has appeared in these columns, but some is new. Most of the discussions are expanded compared to what they were in the original column format.

Despite my best efforts, I have just never been able to cultivate a strong interest in math. I’ve never been great at it, but then again, I’ve never been all that bad at it, either. I guess it all comes down to the fact that I’d rather be learning something else, and right down to this day, I’ve never used any of the more advanced math that I learned through my schooling. With that said, stay in school, kids, and always try your best. Well, now that the public service portion of this review is over with, let’s get on to the real issue at hand. There’s no question that calculators are handy tools to have around, and they can really help to get you out of a bind. With calcr, you’ll always have additional help nearby. Get it?
END_OF_DOCUMENT_TOKEN_TO_BE_REPLACED