Chris and Jedi play with a remote control R2-D2 toy! This droid can be controlled and interacted with through an app!

You can also just love it like Jedi does!

END_OF_DOCUMENT_TOKEN_TO_BE_REPLACED

I switched from DishNetwork to DIRECTV on Wednesday December 8, 2010. I had been using Dish for 3 years and I had no complaints with the service. My only reason for switching carriers was because DIRECTV was offering a better deal for new customers, so I decided to give DIRECTV a try. Prior to having Dish, I had cable TV from a local provider, so I have no brand loyalty to either cable nor satellite. My only consideration is how much it costs me a month.

Equipment: Dish uses a single HD-DVR which comes with two tuners built into the receiver which controls two TV’s. The first tuner broadcasts a HD signal whereas the second tuner only broadcasts in SD. In my case the HDTV in my bedroom only received a standard definition signal which was less than stellar. DIRECTV supplied me with a HD-DVR for the living room and a HD receiver for the bedroom. Both broadcast signals in HD including local stations. You can also view recorded programs and record programs from both rooms.

Picture Quality: Both my wife and I noticed that it appears to us that DIRECTV has a better picture in HD with more depth than did Dish. This is on all stations which broadcast in HD. SD channels are the same for both DIRECTV and Dish.

DIRECTV offers what is called a Quick Tune feature. Using Quick Tune you can set up up 9 stations you watch most often. With this feature you do not have to surf through the channel guide.

Channel lineup: 200, 220, 250 channels oh my! Everyone of us have different viewing habits and different programming needs. But what both DIRECTV and Dish have in common is that both like to include their music channels in the programming packages. Plus both include programming such as CSpan, multiple news networks and so forth that I never watch. When I setup my Favorites programming I end up with about 90 channels that my wife and I normally view and that is out of the 205 channels I signed up to receive. Typical for both DIRECTV, Dish and if I recall cable as well.

Recommendation: I believe that both DIRECTV and Dish provide very good service. I would give DIRECTV a slight advantage over picture quality but not to the point where I would not use Dish again. IMO opinion both DIRECTV and Dish are both better than cable, but that may just because where I live, the cable service is mediocre. Your mileage may vary. 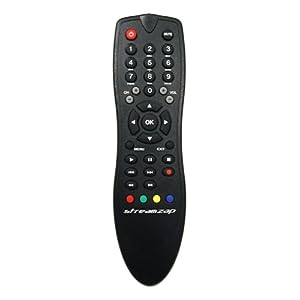 The Streamzap PC Remote makes it easy to control your PC using a simple hand-held remote just like you use to control your stereo or TV. It’s a great addition for anyone who uses their PC for music or DVD playback, or even for PowerPoint presentations!

Normally when it comes to tech support, I find myself lending a hand to those in need without much distance involved. For so many things, being there is person is just easier. But in recent years, there have been a lot of great improvements that now allow people to support friends, family, and clients from their home offices.

Having used every application imaginable has given me a lot of insight as to the shortcomings of most remote control software options. Only recently have I seen more of them beginning to support OS X. And believe me, it’s about time. But sadly, this has left those of us using Linux distros such as Ubuntu largely in the dust. And setting up SSH with X Forwarding only goes so far.

Then I started using TeamViewer. What I love about using TeamViewer most is the fact that I am now supporting folks who use Windows and OS X, all from my Ubuntu box. Yes, I am providing tech support with all of the bells and whistles, without needing to boot into a Windows installation.

Another killer feature is that my Windows and OS X users can avoid anything complicated. Just download and run a non-installing quick help program. Boom, I am connected securely without dancing around firewalls or router configs. The “Instant Customer” support application is just what the doctor ordered when helping anyone out on either platform. Best of all, all of the applications are free for non-commercial users. Did I mention the remote support option for the iPhone?

From the strong data compression for speed to remote ctrl-alt-del and reboots, I could not be happier to see that TeamViewer decided to find a way to include the Linux users out there. It’s about high time.

Of all the mysteries of modern life, the frequent disappearance of the remote control provides a disproportionate contribution to family strife.

It always seems to happen at an inopportune moment… immediately before someone’s favorite show, for example. Or when something inappropriate for younger eyes suddenly appears on the screen.

“Where’s the remote control?” comes the cry from the couch or recliner.

The answer to the missing remote control is often found buried inside that couch or recliner. Remote controls have an unnerving capacity to burrow deep into the cushions. On occasion, they may seek refuge under the furniture, as they seek solace with the dust bunnies.

Sometimes they grow legs, and travel to the next room… or wings, that fly them to the other side of the house. This, however, is most rare.

A remote control has to go missing at least once a week here at Ranchero Indebto. It must be specified in their contract. After all, how long could you go along with everyone pushing your buttons all night?

It’s not so odd in that context. Perhaps they just need a little break from the pressures of life.

Push a button, change the color of your lights!

My friend Willie over at ThinkGeek sent me this new remote control Dalek to play with. If you know much about Doctor Who, you’ll know what a Dalek is.

Doctor Who is a guilty pleasure in the US and an obsession in the UK. Amazingly the show is still being produced today with the tenth successive Doctor now in play. Of course we all know the Daleks are the real stars of Doctor Who. With a toilet plunger in one hand and a elongated egg beater in the other, Daleks are some of the deadliest cyborgs in the galaxy. Bitter from being mutated by radiation and stuffed inside an inferior robot body, the Kaled people hate the Doctor (and staircases) and are bent on universal domination… and who can blame them really? Finally you too can act out your Dalek fantasies with these detailed R/C replicas. Each R/C Dalek stands 12 inches high and is happiest when gliding around your home shouting “EX-TER-MIN-ATE!” and hunting for the Doctor. Complete with tank-like controls and digitized grating Dalek voices you’ll feel just like you’re in your own low-budget BBC telly show.