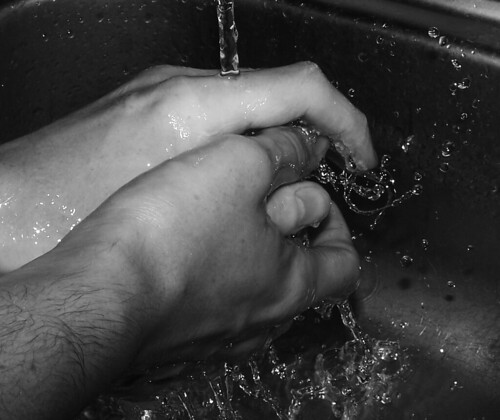 That’s the key finding of a University of Michigan study published in the current issue of Science.

The study, conducted by U-M psychologists Spike W. S. Lee and Norbert Schwarz, expands on past research by showing that hand-washing does more than remove the guilt of past misdeeds.

“It’s not just that washing your hands contributes to moral cleanliness as well as physical cleanliness, as seen in earlier research” said Lee, a doctoral candidate in social psychology. “Our studies show that washing also reduces the influence of past behaviors and decisions that have no moral implications whatsoever.”

For the study, Lee and Schwarz, who is affiliated with the U-M Institute for Social Research (ISR) and the Ross School of Business in addition to the Department of Psychology, asked undergraduate students to browse through 30 CD covers as part of an alleged consumer survey. Participants picked 10 CDs they would like to own, ranking them by preference. Later, the experimenter offered them a choice between their 5th and 6th ranked CDs as a token of appreciation. Following that choice, participants completed an ostensibly unrelated product survey — of liquid soap. Half merely examined the bottle before answering while the others tested the soap by washing their hands. After completing a filler task, participants were asked to rank the 10 CDs again.

“People who merely examined the soap bottle dealt with their doubts about their decision by changing how they saw the CDs: As in hundreds of earlier studies, once they had made a choice, they saw the chosen CD as much more attractive than before and the rejected CD as much less attractive. But hand-washing eliminated this classic effect. Once participants had washed their hands, they no longer needed to justify their choice when they ranked the CDs the second time around,” Schwarz said.

This “clean slate” effect may be relevant to many choices in life. Does washing away the urge to justify one’s choice of one car over another, or even one partner over another, result in less rosy evaluations of them in the long run? If so, does this increase buyer’s remorse because buyers are less likely to convince themselves that they made the best choice possible?