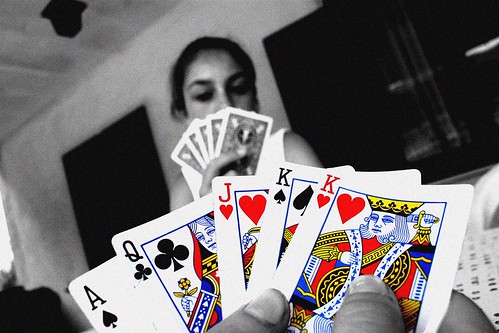 Whether it’s sports, poker or the high-stakes world of business, there are those who always find a way to win when there’s money on the table.

Now, for the first time, psychology researchers at Washington University in St. Louis are unraveling the workings of a novel brain network that may explain how these “money players” manage to keep their heads in the game.

Findings suggest that a specific brain area helps people use the prospect of success to better prepare their thoughts and actions, thus increasing odds that a reward will be won.

The study, published Aug. 4 in the Journal of Neuroscience, identified a brain region about two inches above the left eyebrow that sprang into action whenever study participants were shown a dollar sign, a predetermined cue that a correct answer on the task at hand would result in a financial reward.

Using what researchers believe are short bursts of dopamine — the brain’s chemical reward system — the brain region then began coordinating interactions between the brain’s cognitive control and motivation networks, apparently priming the brain for a looming “show me the money” situation.

“The surprising thing we see is that motivation acts in a preparatory manner,” says Adam C. Savine, lead author of the study and a doctoral candidate in psychology at Washington University. “This region gears up when the money cue is on.”

Savine and colleague Todd S. Braver, PhD, professor of psychology in Arts & Sciences, tested 16 subjects in an experiment that required appropriate preparation for one of two possible tasks, based upon advance information provided at the same time as the money cue. Monetary rewards were offered on trials in which the money cue appeared (which happened randomly on half the trials), provided that the subjects answered accurately and within a specified timeframe. Obtaining the reward was most likely when subjects used the advance task information most effectively.

In particular, Savine and Braver found that the left dorsolateral prefrontal cortex (DLPFC), located in the brain approximately two inches above the left eyebrow, is a key area that both predicts a win, or successful outcome, and prepares the motivational cognitive control network to win again.

Simply flashing the dollar-sign cue sparked immediate activation in the DLPFC region and it began interacting with other cognitive control and motivational functions in the brain, effectively putting these areas on alert that there was money to be won in the challenge ahead.

“In this region (left DLPFC), you can actually see the unique neural signature of the brain activity related to the reward outcome,” Savine says. “It predicts a reward outcome and it’s preparatory, in an integrative sort of way. The left DLPFC is the only region we found that seems to be primarily engaged when subjects get the motivational cue beforehand, it’s the region integrates that information with the task information and leads to the best task performance.

The researchers actually observed increased levels of oxygenated hemoglobin in the brain blood flow in these regions.

The finding provides insight into the way people pursue goals and how motivation drives goal-oriented behavior. It also could provide clues to what might be happening with different populations of people with cognitive deficiencies in pursuing goals.

Savine and Braver sought to determine the way that motivation and cognitive control are represented in the brain. They found two brain networks — one involved in reward processing, and one involved in the ability to flexibly shift mental goals (often referred to as “cognitive control”) — that were coactive on monetary reward trials. A key question that still needs to be answered is exactly how these two brain networks interact with each other.

Because the brain reward network appears to center on the brain chemical dopamine, the researchers speculate that the interactions between motivation and cognitive control depend upon “phasic bursts of dopamine.”

“We wanted to see what motivates us to pursue one goal in the world above all others,” Savine says. “You might think that these mechanisms would have been addressed a long time ago in psychology and neuroscience, but it’s not been until the advent of fMRI about 15-20 years ago that we’ve had the tools to address this question in humans, and any progress in this area has been very, very recent.”

In this kind of test, as in the workplace, many distractions exist. In the midst of a deadline project with an “eye on the prize,” the phone still rings, background noise of printers and copying machines persist, an interesting world outside the window beckons and colleagues drop in to seek advice. A person’s ability to control his or her cognition — all the things a brain takes in — is directly linked to motivation. Time also plays a big factor. A project due in three weeks can be completed with some distraction; a project due tomorrow inhibits a person’s response to interrupting friends and colleagues and allows clearer focus on the goal.

The researchers intend to explore the left DLPFC more as a “uniquely predictive measure of pursuing rewarded outcomes in motivated settings,” Savine says.”Another key research effort will seek to more directly quantify the involvement of dopamine chemical release during these tasks.”

And they may test other motivators besides money, such as social rewards, or hunger or thirst, to see “if different motivators are all part of the same reward currency, engaging the same brain network that we’ve shown to be activated by monetary rewards,” Savine says.

Over at PC World they are giving away a Toshiba 46″ Hi-Def TV for a lucky winner who participates in their survey. The survey took me about 15 minutes to answer questions about my main computer system, wi-fi router and any problems I have had with either. Fairly simple and straight forward.

So take the survey and good luck!

Santa Chris is comin’ to town again, but this time he’s aimin’ on stayin’ longer than your average Christmas tree. We launched The Chris Pirillo Show almost a year ago and have been broadcasting live on the Internet almost every Thursday night. We’ve certainly uploaded far more than a year’s worth of fantastic MP3s since the beginning (if you haven’t been keeping track). That said, we’re going to roll into 2006 with style – and with gifts, EVERY WEEK! We have a dedicated core of listeners – but we thought we’d add a little more incentive for everybody to tune in and participate. Starting with this week’s live broadcast, we’re going to be giving away one substantial gift every single week that we go live. Yes, even beyond Christmas – so it’s like Christmas year-round for active audience members. And when I say “substantial,” I’m speaking at the level of a PSP or Xbox 360 for some weeks – and we hope to give away a full-on computer system at some point, too! We’ll likely rotate the “big gift” with a different one every month, but it’ll always be worth a few hundred dollars. Wow? Bold.
END_OF_DOCUMENT_TOKEN_TO_BE_REPLACED